Wholesale
Menu
Menu
What is Delta 8?

Delta 8 is a psychoactive craze because hemp is full of surprises. That’s because it’s an incredibly versatile plant.

One of the latest surprises to hit shelves is Delta 8 from hemp. If you’re here at Steve’s Goods, you’re probably familiar with Delta 8’s cousins, waxes, CBD cartridges, gummies, and honey from hemp, and only hemp. Now, we’re applying those same skills to crafting top-shelf Delta 8 products made from hemp, too.

If you’re new to Delta 8, keep reading. And we promise this is one surprise you won’t want to miss.

Delta 8 is a cannabinoid found naturally in cannabis. Delta 8 can also be made from special hemp processing methods. Cannabinoids are compounds that bind to the body’s cannabinoid, or CB, receptors.

“Cannabinoids” get the name from the cannabis plant. During the 1980s and 1990s, research into cannabis’s effects on humans and animals led to the groundbreaking discovery of the endocannabinoid system, a physiological system much like our digestive, respiratory, and circulatory systems.

You likely already know about some cannabinoids, like THC, CBD, CBG, and CBN. Delta 8 is just another cannabinoid among this group of amazing compounds.

While cannabis plants naturally produce Delta 8, they typically only produce it in small amounts. The Delta 8 infused into Steve’s Goods waxes, edibles, and vape cartridges are made from pure hemp CBD, and only from hemp CBD.

This part will get a little technical. If it gets too dense, feel free to skip to the additional sections below.

As a cannabinoid, Delta 8 has a similar chemical makeup to THC and CBD. However, the small differences among these molecules are what give them unique properties.

Some atoms can share more than two electrons, though. When two atoms share two pairs of electrons or four electrons total, they possess what’s called a double bond.

Now imagine the three-ringed THC molecule again, except there’s a break between two atoms along the central ring. That break will cause the molecule to become two twisting rings attached by a string of carbon atoms between them. This twisting, two-ringed version of THC is CBD. CBD’s similarities to Delta 8 and THC allow it to interact with our body’s CB receptors, but it does so differently than Delta 8 or THC. Whereas Delta 8 and THC bind to the CB1 receptors in our nerves, spine, and brain, CBD binds to our CB2 receptors found on immune cells and in the spleen. 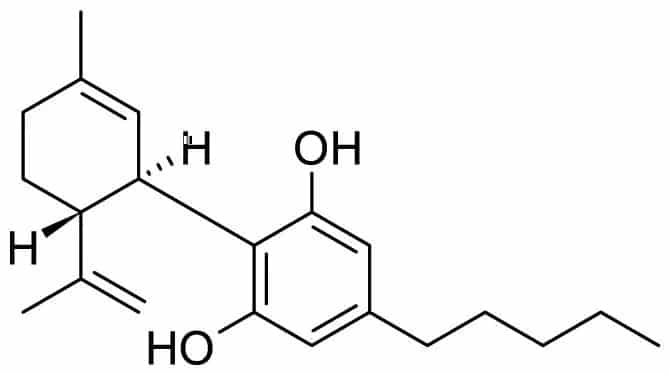 Cannabinoids, terpenes, and other cannabis compounds work together in our bodies through something called the entourage effect. Check out Steve’s Goods Full Spectrum products, made from hemp whole-plant oils rather than individual cannabinoid isolates, for a more thorough entourage effect.

A Brief History of Delta 8

Delta 8’s story begins about 28 million years ago, in the high plateaus of Tibet. Scientists believe the first cannabis plant appeared there way back when wooly mammoths still roamed the area. Over the eons, cannabis spread throughout much of what would later become the Asian and African continents.

At some point during its evolution, cannabinoids like Delta 8 and Delta 9-THC provided the plant natural protection against its environment, its climate, and herbivores. Then, about 2700 years ago, humans began cultivating cannabis for its various uses, such as for making clothes, rope, sails, medicines, and its inclusion in religious rituals.

Although Delta 8 is marketed as a “new cannabinoid,” scientists have known about it for decades. In the 1940s, Dr. Roger Adams, the first chemist to propose that cannabis produces THC and CBD, was also one of the first to discover Delta 8. Adams also devised a method for synthesizing Delta 8, but he never completed the recipe. About two decades later, another university’s team would complete Adams’s work.

Starting in the 1960s, the renowned Dr. Raphael Mechoulam and his research team at the University of Tel Aviv identified and characterized THC, CBD, and Delta 8, among many other cannabinoids. Mechoulam’s team, as well as the US government, have also patented several methods for extracting, converting, and creating cannabinoid products.

A few years ago, a patented process for converting CBD to Delta 8 became available for public use. With patent restrictions expired, adventurous hemp companies dove head-first into the Delta 8 space, which is how we got to where we are today.

Today, Delta 8 products are almost entirely made from hemp extracts. People dab, vape, eat or drink Delta 8 for its unique psychoactive effects, which are more potent than CBD but less potent than THC. If you’re looking for Delta 8 goodness packed with flavorful, aromatic terpenes, Steve’s Goods is the spot.

At the moment, Steve’s Goods offers Delta 8 products for dabbing and vaping.

Steve’s Goods Delta 8 Wax Dabs maintain the consistency of rich flavor, perfect for sticking to your dab wand and dipping on a nail. These exclusive, black-label Delta 8 wax concentrates come in three sweet, award-winning flavors: Blueberry, Pineapple, and Strawnana. Hitting Steve’s Goods fruity Delta 8 dabs taste just like inhaling a plume from fresh blueberries, pineapples, or — in the case of Strawnana — a fantastically sensual fusion of strawberries and bananas. 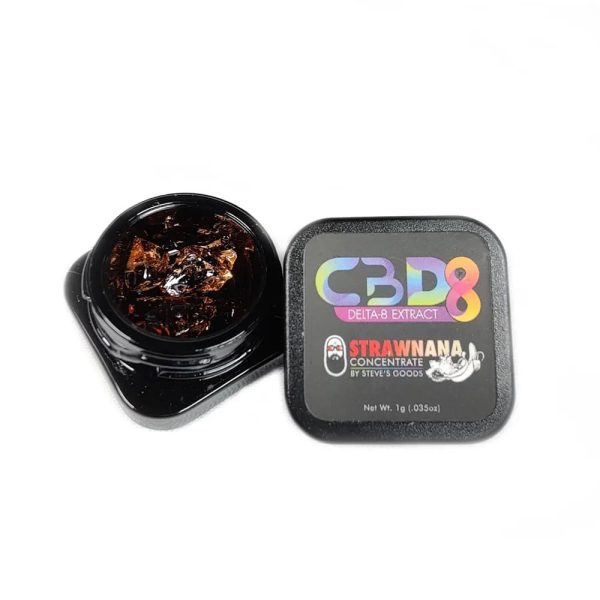 For the toker on the go, check out Steve’s Goods Delta 8 Cartridges or also known as Delta 8 Carts. Like the Delta 8 wax concentrates, the Delta 8 vape cartridges contain 1g of hemp-derived Delta 8, jam-packed with the same terpenes found in berries and pomes. Steve’s Goods Delta 8 carts also come in Blueberry and Strawnana flavors. Each will fit on any vape battery with 510 threading. 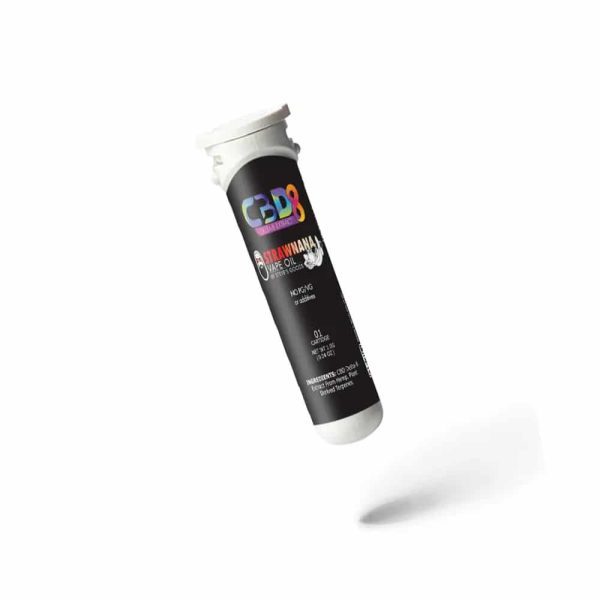 For the gummy enthusiast, we now serve up a new vegan treat. Our delta 8 gummies contain 25mg of Delta 8 extract per gummy! Made with pectin and perfect for any day; enjoy them today to get your fix without animal products or additives like artificial sugars/flavorings.

These Delta 8 Lollipops are perfect for anyone looking to avoid getting high quickly. These long-lasting candies take 30 minutes before they fully release their dosage so you have time to enjoy them, rather than just feeling effects after taking one candy all at once! 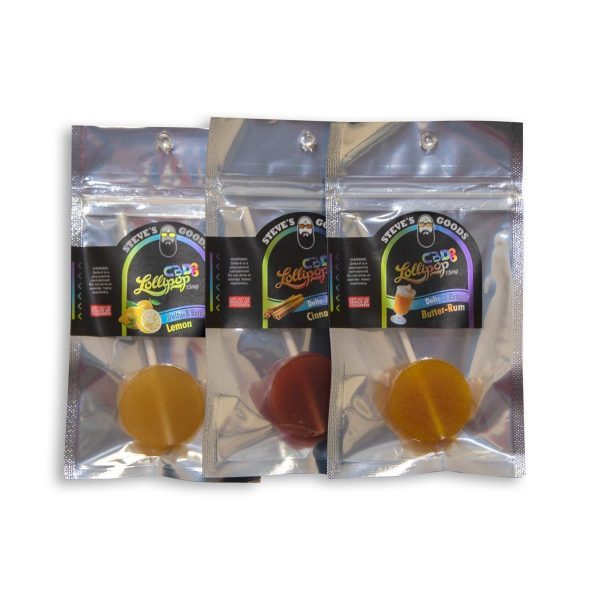 If you’re looking for something less psychoactive than Delta 8, check out Steve’s Goods CBD Concentrates instead. However, Delta 8 fans should stay tuned for our upcoming Delta 8 lineup.
Steve’s Goods: Delta 8 Gummies now available!

Delta 8 gummies are now available at Steve’s Goods. These chewy, delectable edibles will contain 25mg of Delta per bite-sized piece (or 1125 mg in case you want to treat yourself). If the name is any indication, these delicious treats may provide some grounding for those looking forward with an adventurous mindset!

The product description reads: “Since STEVE’S GOODS has committed itself towards bringing quality hemp products like our line of Delta 8 Gummies; we’re proud to announce that customers can purchase this medicated candy cube and enjoy new and tasty flavors like strawberry kiwi.

For customers who prefer edible options with less heady effects than Delta 8, check out Steve’s Goods CBD gummies and CBG and CBN edibles.

Is Delta 8 Allowed Where I Live?

As it goes with all things cannabis, whether Delta 8 is legal where you reside depends on where you live.

Some states recently clarified their regulations regarding Delta 8. Other states have not yet done this, while other places have taken a hands-off approach to Delta 8.

Steve’s Goods only offers Delta 8 where it’s permitted. Please check with your local laws to ensure whether Delta 8 is allowed where you live.

Are Delta-8 products legal in Texas?

In a time where people are getting more and more anxious about their health, many have turned to marijuana as an alternative treatment for chronic pain. The problem? Delta-8 can be harmful if taken incorrectly or at high doses so some states banned the cannabinoid altogether within certain limits of THC content in order to prevent misuse while others restricted its usage with prescriptions from doctors who have been trained on how specifically use this medication.

In response to a recent court decision, Texas is temporarily lifting restrictions on Delta-8. In October they announced that sellers in the state could not sell delta-8 until further notice due to their legal status as an “outlaw” company without operating within the confines of federal law or complying with administrative requirements.

The court concluded that the restriction did not comply with administrative requirements.

If you’re looking for shatter, wax, dabs, cartridges, oils, tinctures, pet products, gummies, or other edibles permitted just about everywhere in the US, check out Steve’s Goods CBD products.

Exhale into the Future

As each day seemingly brings an exciting new cannabis product to stores, Delta 8 and other cannabinoids will take center stage. With the entourage effect, cannabis works best when its components are infused in unique combinations. Steve’s Goods combines Delta 8 waxes, shatters, and concentrates with the tastiest, yummiest terpenes also found in the cannabis plant.

Or, for something more chill, check to buy CBD concentrates like our award-winning CBD Wax Strawnana.

If you’re not into added terpenes, you can go with our pure CBD Wax, and with our newest price decrease; you can buy cheap CBD Wax for even cheaper!

Is CBD isolate more your style? We have the cheap CBD isolate dabs which can also be called Cheap CBD Shatter.

Don’t forget to sign up for our newsletter below to be in the know about our CBD Concentrates for sale.

What are Delta 8 carts?
Delta 8 carts or cartridges for the long term are vape cartridges filled with pure Delta 8 and mixed with plant-derived terpenes. This mixture of distillate inside a cart is known as a Delta 8 vape cartridge or delta 8 carts for short.
Do Delta 8 carts and Delta 8 wax get you high?
Yes. Delta 8 is a type of psychoactive cannabinoid, and this means that it will have some sort of effect on the brain. A person may feel high or euphoric after consuming Delta8 because it alters how their brain functions while in use. 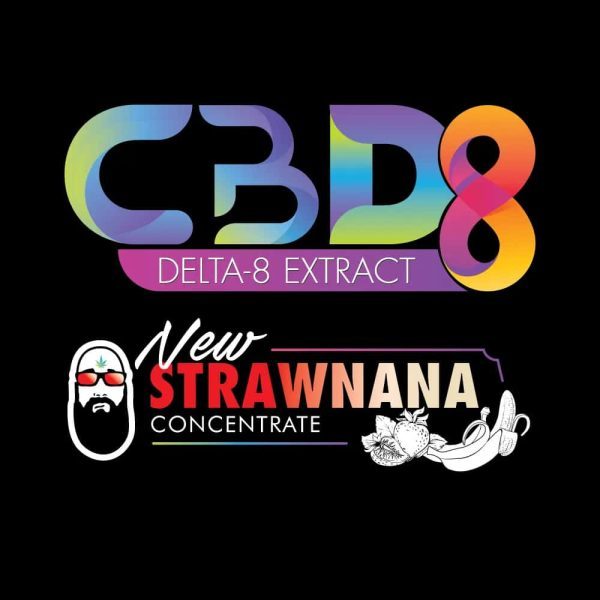 Why buy Delta 8 from Steve’s Goods?

Steve’s Goods has been making the best hemp-derived CBD concentrate for three years in a row. No one comes close to our quality standards, and it is evident by all of these awards we have won! With products like CBD Waxes, CBD Shatters, CBG Dabs – you name it; Steve’s Goods will make sure that your needs are met when looking for this type of product.

Steve’s Good started out making high-quality extractions using only natural ingredients free from chemicals like harsh alcohols and solvents which can be harmful both during extraction and when used by consumers. It was no surprise then when Steve announced his plans to release an award-winning line of vape oils called “Delta 8”.

We weren’t the first, but we will be the best, purest, and safest.

What Delta 8 products are you selling?

We sell 3 different flavors of Delta 8 extracts based on our flagship terpene profiles: Strawnana, Pineapple, and Blueberry.

We will be selling Delta 8 cartridges in 5 different flavors based on our flagship terpene profiles: Strawnana, Blueberry, Girl Scout Cookies, Terpin Gorilla, and Pineapple Express. 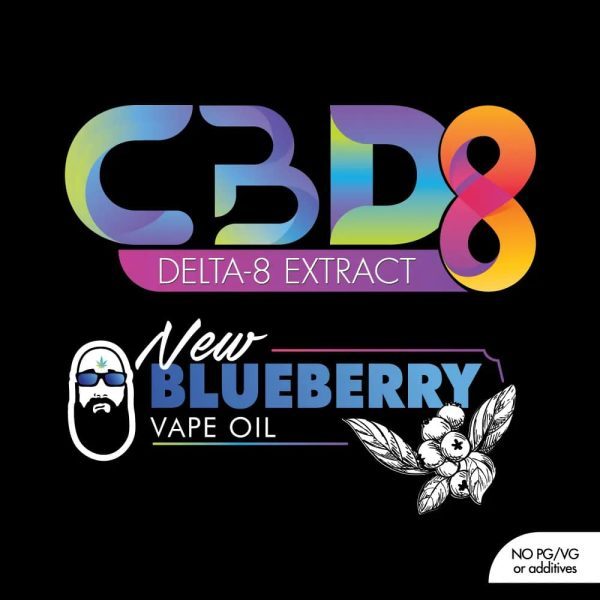 Check out our CBD discounts page or you can chat with a live person to get a coupon or join the mailing list.

If you haven’t read our Everything you need to know about Delta 8 blog post, you should start there next to learn more direct facts.